As I mentioned several weeks ago in the post commemorating the 80th birthday of the Queen Mary, I was waiting to get color film returned from the lab before I did a comprehensive story on our wonderful day touring the ship. It didn't once cross my mind that, when visiting and photographing such an icon, such a striking piece of history, the contrast between black + white and color photographs would be much greater than many other types of places I enjoy to visit. Try as I might, I couldn't see how my words and images from the Queen Mary could be presented in anything other than black + white.

Living in Southern California, the Queen Mary and -- until the early 1990s -- Howard Hughes' Spruce Goose were a destination for school field trips, family outings, and a perfect spot to take visitors from out of town. The Queen Mary has attracted one million visitors a year since 1967 at its permanent home at the Long Beach terminal, standing tall and proud and full of history and memories to be made for all who visit her. I visited the Spruce Goose as a small child but had never been aboard the Queen Mary until May, when my husband surprised me with a day of adventure for my birthday.

Immediately upon our arrival we met up with The Glory Days Historical Tour, one of several tours offered to ship visitors. The tour (led by longtime docent, Eric, who was excellent!) was a great introduction to the ship, providing just enough information to familiarize us with its colorful history while we looked forward to exploring on our own to add to that knowledge. 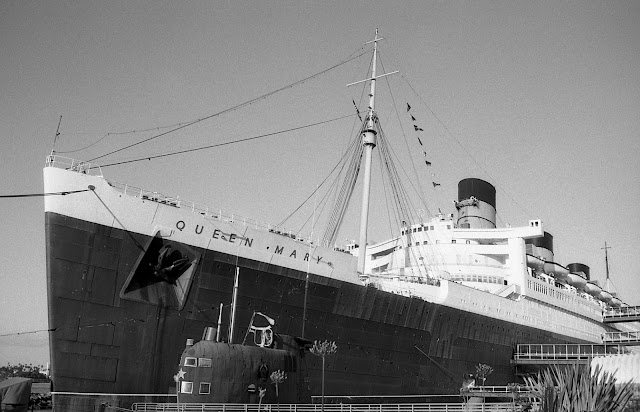 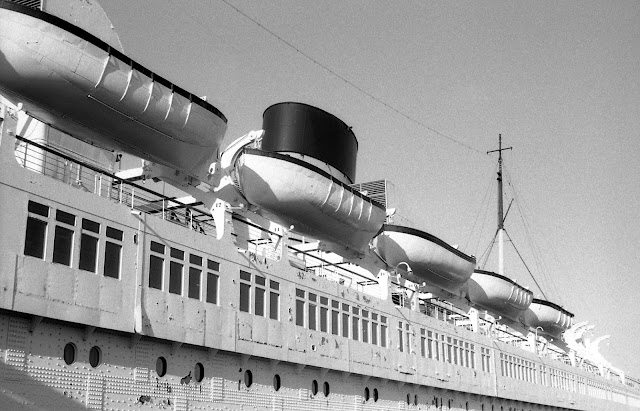 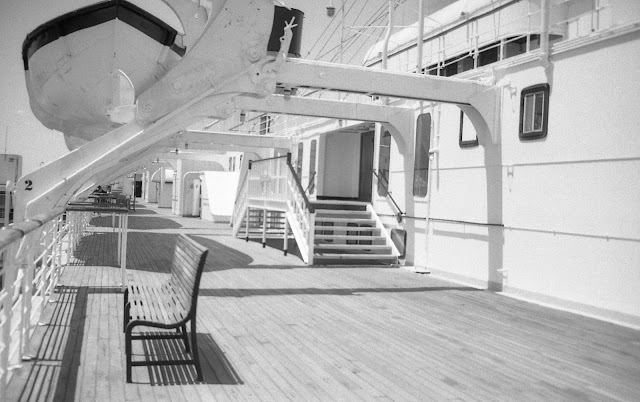 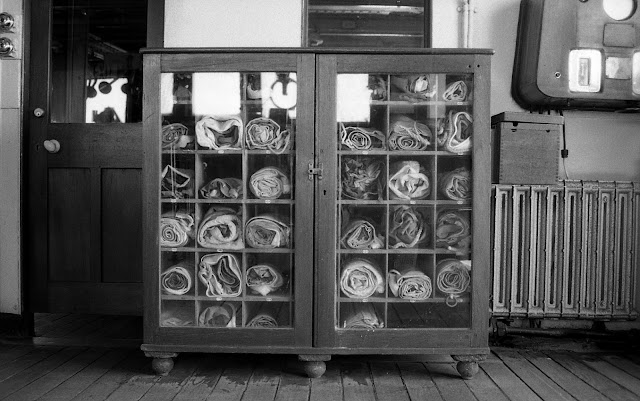 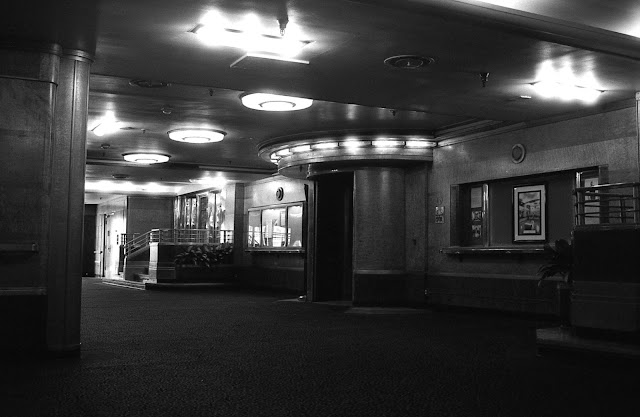 I'm going to be very careful not to give anything away -- one of the things I found so special about our entire day on the ship was how many treasures there were to be found around every corner. I hadn't felt this way about a place since the first time I visited the Orange Empire Railway Museum, a combination of "Is this really happening?" mixed with "I never want to leave!". Stepping foot on board the Queen Mary on this gorgeous spring day, I had no idea that I was stepping into a time machine. An 81,227 gross ton time machine, longer than the Empire State Building is tall, and one that has made a significant impact on millions of people in its 80 years afloat, myself included.

Three of these people are of great importance to me -- Alfred Hitchcock, his wife Alma Reville, and their daughter, Pat, first came to the United States from England aboard the Queen Mary in 1937.

(Coincidentally, today is Alma's birthday, and yesterday was Hitch's -- they were born a day apart in 1899).

Here is a photograph of the Hitchcock family on board the Queen Mary in 1939, when they moved to the States. 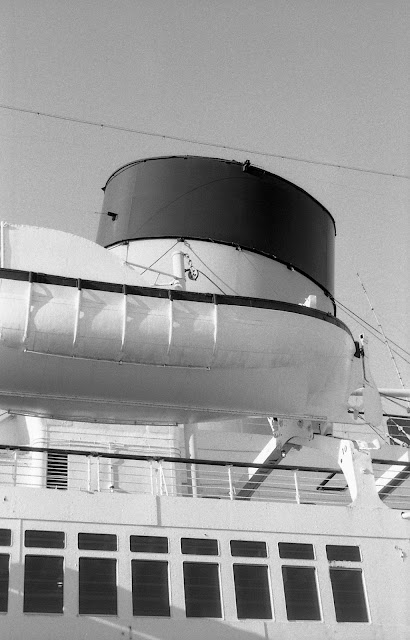 Throughout the day I kept thinking of how wonderful it was that, essentially, we had the ship to ourselves. The ship is so enormous that we rarely came across anyone else on our adventure. Once visitors or hotel guests are on board, all are allowed to roam freely among its 12 decks. The staff are helpful and polite, and only a few areas are restricted to hotel guests only or require a separate admission. It's not hard to feel like part of the ship -- one more name added to its endless guestbook. 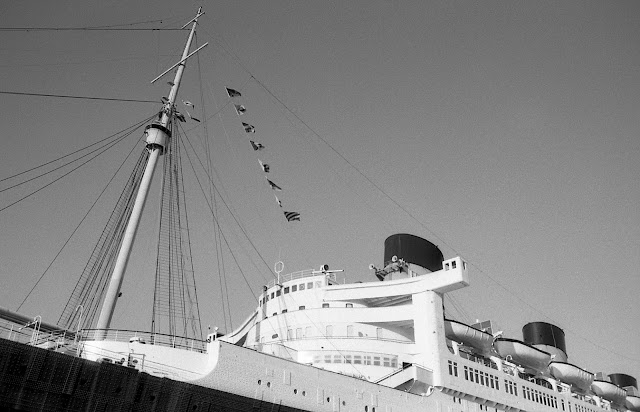 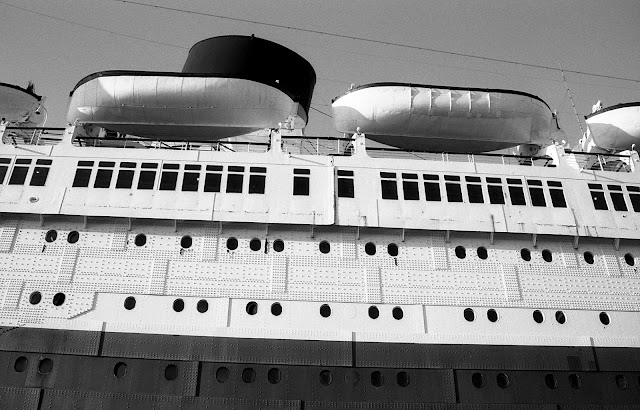 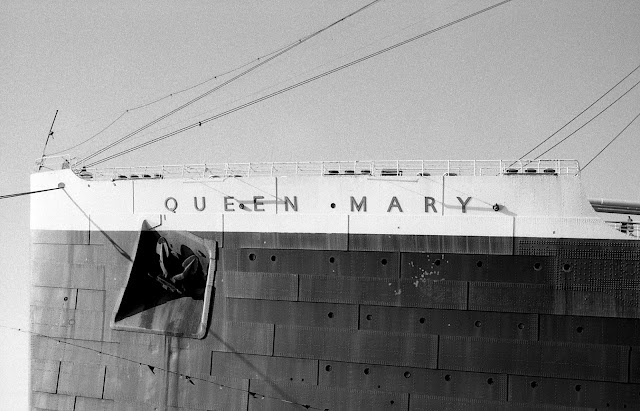 I absolutely cannot wait until our next Queen Mary visit -- perhaps to stay the night in one of its guest rooms, or maybe to take a ghost tour. I know that despite an entire day exploring we've really only scratched the surface.